Fortunino Matania: Reception at India Office on the King's Birthday, June 25th 1912 - on Art WW I 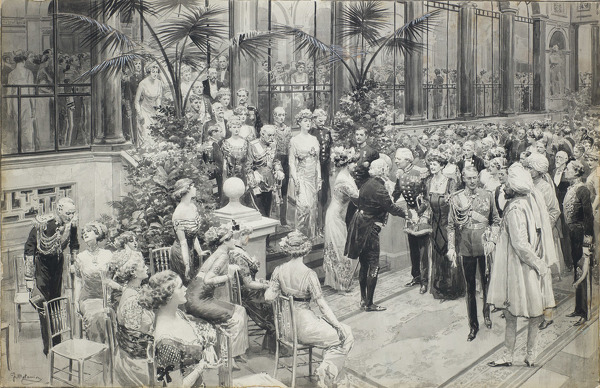 Signed, inscribed to reverse with titel and extensive notes to the printer
Pencil, black chalk, pen and black ink and grey wash heightened with white, on board;
14 x 21 in. (36 x 53.3 cm.)

Provenance: From the archives of the illustrated London News; Christies 7.10,.2014, lot 20

In 1904, Matania joined the staff of The Sphere where some of his most famous work was to appear, including his illustrations of the sinking of the Titanic in 1912.   His reputation was further enhanced by WW1 through which he became  acclaimed for his graphic and realistic images of trench warfare.

IN 1912 the Royal Flying Corps was established.  The RMS Titanic sank after hitting an iceberg. Over 1500 crew and passengers died.

The Blue Rider Almanac was  published in Munich, containing reproductions of more than 140 multi-ethnic artworks, articles on the visual arts and music and Vasilly Kandinsky's experimental theater composition The Yellow Sound.

Austrian writer Frida Strindberg opens The Cave of the Golden Calf, a London nightclub decorated by Spencer Gore, Wyndham Lewis, Charles Ginner and Jacob Epstein with its motif by Eric Gill; it becomes a haunt of Futurists.

Exhibition of Italian Futurism transfers from Paris to the Sackville Gallery in London, organised by Robert RenÃ© Meyer-SÃ©e.

Giacomo Balla â€“ Dynamism of a Dog on a Leash