Fortunino Matania: Upper class diners at The Savoy on election night, 1922 - on Art WW I 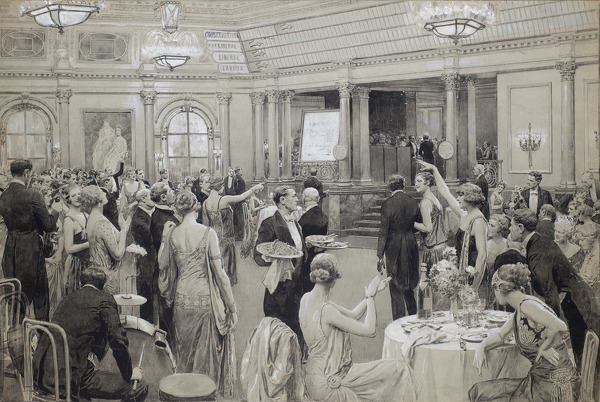 Signed, inscribed to reverse with title and extensive  notes to the printer
Pencil, black chalk, pen and black ink and grey wash heightened with white, on board;
14 x 21 in. (36 x 53.3 cm.)

Provenance: From the archives of the illustrated London News; Christies 7.10,.2014, lot 20

In 1904, Matania joined the staff of The Sphere where some of his most famous work was to appear, including his illustrations of the sinking of the Titanic in 1912.   His reputation was further enhanced by WW1 through which he became  acclaimed for his graphic and realistic images of trench warfare.

IN 1922 The BBC was founded as the British Broadcasting Company. Bonar Law became Prime Minister, replaced by Stanley Baldwin in May 1923.

Max Beerbohm's collection of caricatures, Rossetti and His Circle, is published in London.

William Orpen â€“ To the Unknown British Soldier in France[3]