Ellis Martin: The Field Survey Battalion - on Art WW I 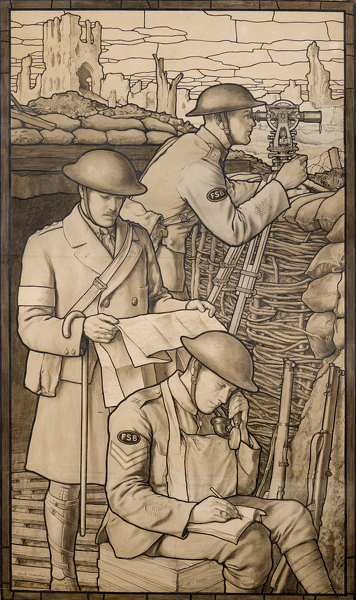 
This design depicts three Royal Engineers in a trench (each with badge on arm â€˜FSBâ€™), comprising a Captain reading a map of Ypres, a Corporal communicating, and a Private looking through a telescope
Ellis Martin was an accomplished commercial artist who, before the First World War, produced posters and advertising designs for firms such as Selfridges and W.H. Smith. When WWI broke out he went to France with the Royal Engineers and the Tank Corps, as an artist sketching the landscapes over which the army and its heavy vehicles would have to move. When the war ended, Martin was invited to join the Ordnance Survey which was struggling to capture the burgeoning market due to the proliferation of cheap pirated versions of OS originals. Martinâ€™s first map cover designs appeared in 1919 and within a year the OS was reporting the highest map sales in its history. Martin continued to work for the OS until the outbreak of the Second World War, and in that time he helped make Ordnance Survey a household name; his cover designs show a bygone way of life and are much collected today.