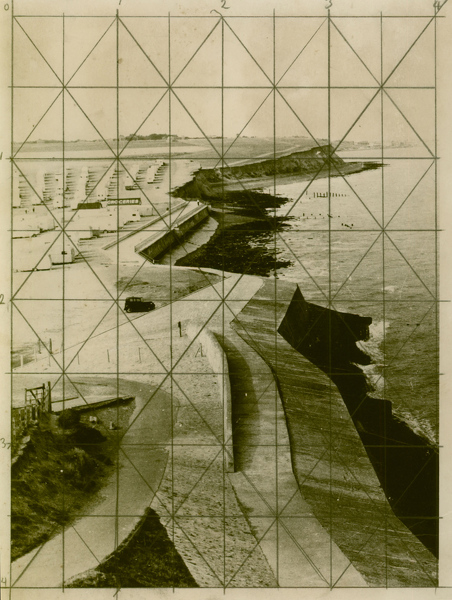 In 1946 Spear used this photograph to produce a print entitled Reculver Towers, the vantage point from which this view was taken.

Reculver is a village and coastal resort about 3 miles (5 km) east of Herne Bay in south-east England, in a ward of the same name, in the City of Canterbury district of Kent. It is about 30 miles (48 km) east by north of the county town of Maidstone, and about 58 miles (93 km) east by south from London. Reculver once occupied a strategic location at the north-western end of the Wantsum Channel, between the Isle of Thanet and the Kent mainland. This led the Romans to build a small fort there at the time of their conquest of Britain in 43 AD, and, starting late in the 2nd century, they built a larger fort, or "castrum", called Regulbium, which later was part of the chain of Saxon Shore forts. The military connection resumed in the Second World War, when Barnes Wallis's bouncing bombs were tested in the sea off Reculver.
Sediments laid down around 55 million years ago are particularly well displayed in the cliffs at Reculver. Nearby Herne Bay is the type location for the Thanet Sand Formation, a fine-grained sand that can be clayey and glauconitic and is of Thanetian (late Paleocene) age. It rests unconformably on the Chalk Group, and forms the base of the cliffs in the Reculver and Herne Bay area. 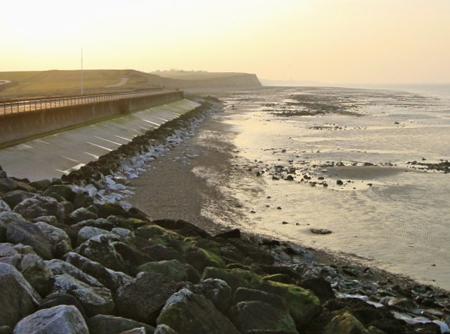 Francis Howard Spear (1902-1979) was a printmaker and a stained glass artist who attended the Royal College of Art with Bawden, Ravilious in the mid 1920's and later went onto teach at the School. The V&A holds examples of his stained glass and a number of designs for stained glass, and his coloured lithographic print Horse Race.