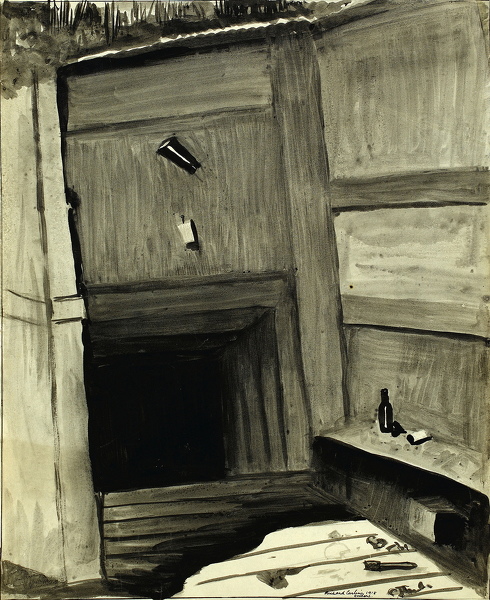 Carline was a Lietenant in the Royal Air Force and served in France. Towards the end of the war he was appointed an Official War Artist and with his brother he became noted for aerial views.

Ovillers, a village about 5 kilometres north-east of the town of Albert, was attacked on the first day of the Battle of the Somme, (1st July 1916) and subsequently the scene of numerous exchanges. It was lost during the German advance in March 1918, but retaken on the following 24 August by the 38th (Welsh) Division.

Ovillers Military Cemetery was begun as a battle cemetery behind a dressing station in 1917.  The cemetery was increased after the Armistice when Commonwealth and French graves where brought in, mainly from the battlefields of Pozieres, Ovillers, La Boisselle and Contalmaison.  There are now 3,440 Commonwealth servicemen of the First World War buried or commemorated in the cemetery. 2,480 of the burials are unidentified.

The trench network of World War I stretched approximately 25,000 miles (40,200 km) from the English Channel to Switzerland. The area was known as the Western Front. British poet Siegfried Sassoon wrote, â€œWhen all is done and said, the war was mainly a matter of holes and ditches.