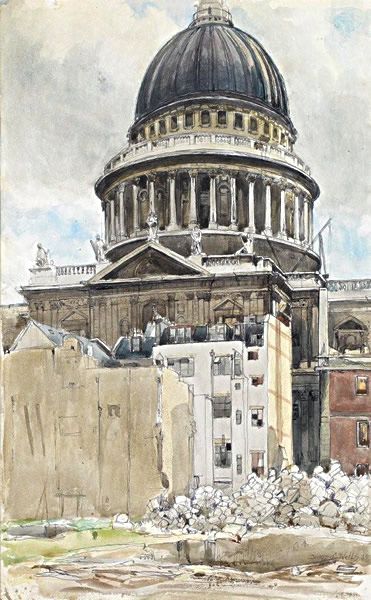 Watercolour, pen and ink on paper,

Bomb damaged buildings - especially churches - were a common theme amongst WAAC commissions. For the purpose of propaganda such images had an obviously message about the uncivilized nature of German aggression. There was also an obvious visual appeal which linked with the tradition of picturesque and the drama afforded by the new shapes and forms of structures blasted open.  The symbol of St Paul's standing defiant, was one of the most familiar images  of WW2.

Having served as a commissioned officer with the Artistâ€™s Rifles in France during WW1 by the start of WW2 Wells was too old for regular service and instead served as an air raid warden. Perfectly placed to record the destruction of the City that he witnessed first hand Wells embarked on a series of  watercolours often painted in situ the morning immediately after an air raids. A number of these were exhibited at the Royal Academy of Arts, (such as Waterloo in War-time, 1943 no. 596).