Pseudonym of Rene Georges Hermann-Paul, born in Paris, he trained as a painter at both the Ecole des Arts Decoratifs and the Academie Julian.  Hermann-Paul's prints and caricatures established his reputation by the beginning of the twentieth century.  His drawings for Le Courrier  Francais, starting in 1894, and for Le Rire, as well as his active support of Alfred Dreyfus, led to involvement with anarchist journals.  A satirist of bourgeois values, cynical, abrasive, and even rude in his depictions, Hermann-Paul was an active social commentator for more than three decades, although in his last years his politics moved decisively towards the right.We are grateful to Teri J. Edelstein and Neil Harris for the above information taken from their book En Guerre French Illustrators and World War 1, Neil Harris and Teri J  Edelstein, The University of Chicogo Library, 2014 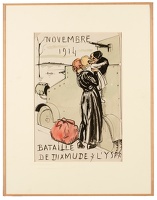