Frank Brangwyn: The artist working on a study for Rockefeller Murals - on Art WW I 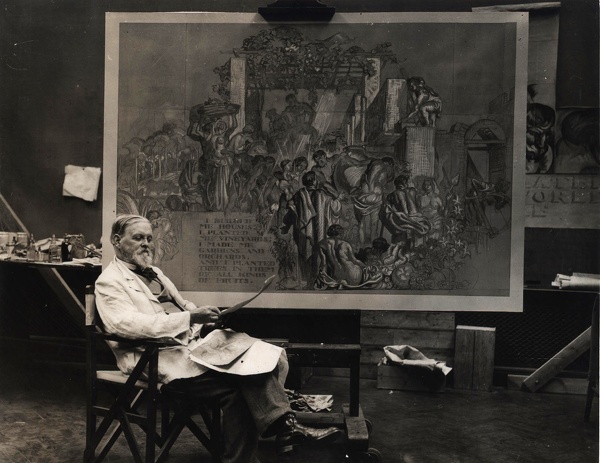 In 1932, Brangwyn was commissioned by J. D. Rockefeller Jr. (1874-1960) to produce four large murals for the RCA building, the centrepiece of the Rockefeller Plaza in Manhattan, New York. These are still in situ in the entrance hall, decorating the area of the south corridor elevator shafts, each measuring 17 x 25ft.

J. D. Rockefeller Jr. had originally approached Pablo Picasso (1881â€“1973) and Henri Matisse (1869â€“1964), but both artists turned the commission down.
Brangwyn, Josep Maria Sert i Badia (1874â€“1945) and Diego Rivera (1886â€“1957) were subsequently appointed to carry out the scheme. The three artists were briefed to work on canvas, (of which no more than 75% was to be covered), to paint en grisaille and to include some lettering in their designs. The broad subject matter of the murals was 'New Frontiers', encompassing aspects of a modern society, including science, labor, education, travel, finance and spirituality.
Brangwyn was assigned four themes expressing man's search for eternal truth: Man Laboring; Man the Creator; Man the Master; Manâ€™s Ultimate Destiny.
In May 1933, the murals made headline news when a public dispute arose between Rockefeller and Rivera; Rivera had included a portrait of Lenin on one of his canvases, and it was subsequently destroyed. In September 1933, Brangwyn also faced controversy when objections were made to his inclusion of Christ in a scene representing the Sermon on the Mount. To solve the dispute, Brangwyn discreetly reversed his figure â€“ as seen in the image below. The irony that Christ had turned his back on Rockefeller was not lost on some observers.
Finding his studio in Ditchling too small to accommodate the murals, Brangwyn was granted permission to use one of the rooms in the Brighton Pavillion to carry out his work. He never saw his paintings in situ.

Brangwyn's Rockefeller murals are similar in spirit to many of the works produced for the Works Progress Administration (WPA) scheme. Brangwynâ€™s murals also bare comparison to the Soviet realist aesthetic of the period, in which workingmen and women were celebrated in patriotic images. 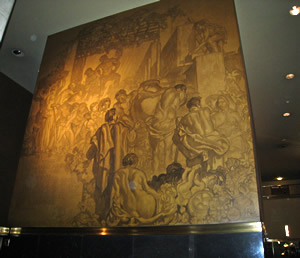