Frank Brangwyn: The Body of King Edward Being ** of Paddington - on Art WW I 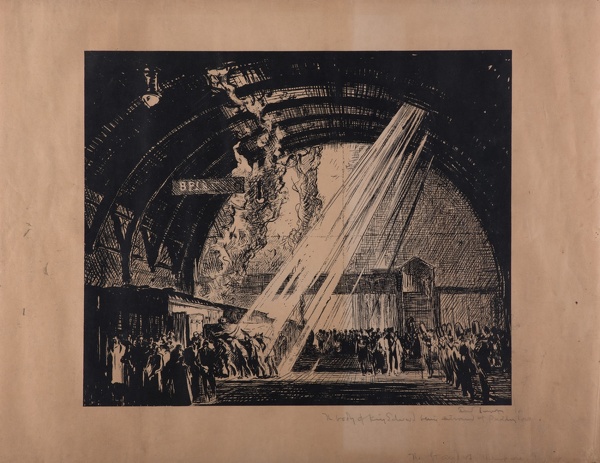 Frank Brangwyn:
The Body of King Edward Being ** of Paddington
_folio (ref: 9568)

This is a lithograph which appeared as a facsimile in The Standard, (21 May 1910), described as 'The Scene at Paddington'.  It records the Funeral of King Edward whose bier is being loaded on to a train (on the left) at Paddington Station en route to Windsor.

Brangwyn was a fervent believer that art should be accessible to all, regardless of wealth or station, which probably explains his interest in autographic processes.  A mass produced printed work was obviously considerably more affordable for the general population than a one-off oil painting.  Although Brangwyn cut corners â€“ he would rework an image in a variety of media and frequently recycled areas of etching plates to produce another print run â€“ he appeared to give his printed work as much attention to detail and composition as his original pieces.

His interest in printing processes is reflected in the fact that he was made an Associate and Fellow of the Royal Society of Painter-Printmakers in 1903; was the first President of the Society of Graphic Art in 1921, a group which exhibited both drawings and prints at the Royal Institute galleries from 1921 to 1940; and was an active member of the Senefelder Club founded in 1909, succeeding Joseph Pennell as President.

We are grateful to Libby Horner for assistance.Drawing to reverse;