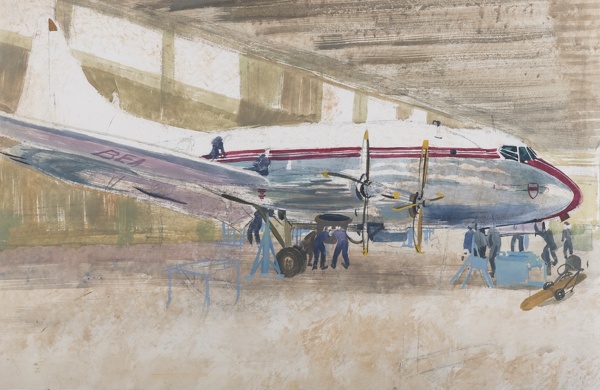 Sauter was passionate about flight. Throughout his career he  produced a series of watercolours inspired by aerial views with rushing perspectives and paintings of various aeroplanes on the ground.  He often took artistic license adapting certain details of the aeroplane design.  In his watercolour of the British European Airways Vickers Viscount there are no windows showing.

British European Airways Vickers Viscount in the 'old' livery (red rather than dark blue).
Vickers Viscounts entered service in 1953, having first flown in 1948, and the Type was a mainstay of many airline fleets for the next 25+ years.  British Airways, which had absorbed BEA, withdrew the Viscount in the early 1980s, but some foreign airlines coninued to use it into 21st century.  The last commercial flights are believed to have been in 2007/2008.
We are grateful to Andrew Cormack for his assistance.