Frank Brangwyn: Study for Landing Men from a Naval Fight, circa 1914 - on Art WW I 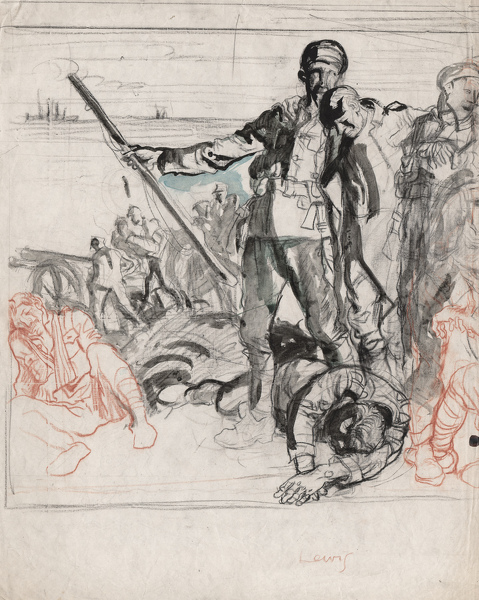 This composition is a study for the lithographic poster printed by the Avenue Press for the 1914 War Society.  The final design included the lettering

â€˜DO YOUR DUTY TO OUR BOYS AS/THEY ARE DOING THEIRS TO YOU/THE 1914 WAR SOCIETY WANTS TO GIVE EVERY DISABLED MAN A FAIR/CHANCE OF HONOURABLE INDEPENDENCE IN HEALTHY RURAL SURROUNDINGSâ€™ and on the right: â€˜DONATIONS/LARGE OR SMALL/BUT SEND NOW WHILE/YOU THINK OF IT.

The same final design was reproduced as a stamp and post card.

It has been suggested that the image depicts the Gallipoli campaign but that took place between 25 April 1915 and 9 January 1916. It is more likely to be a generic scene. For example the Daily News and Leader of 5 August 1914 reported that a naval engagement had taken place off the Scottish coast and that the wounded had been landed at Cromarty.

We are grateful to Dr. Libby Horner for assistance.