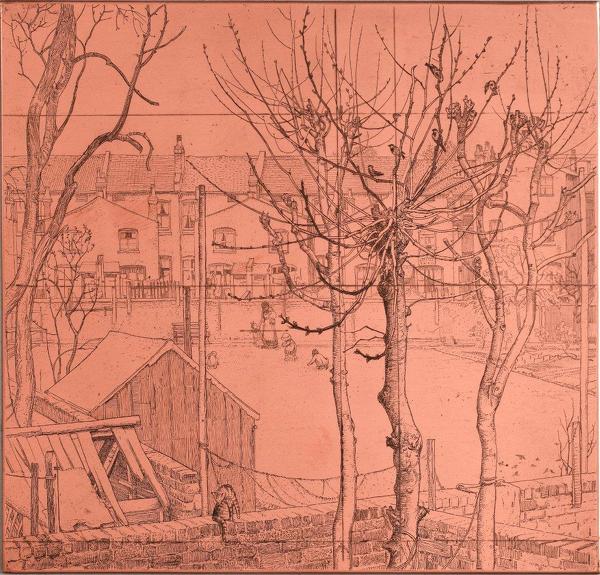 Austin's training as an artist, at the Royal College of Art, was interrupted by the outbreak of the war during which he served in the Royal Garrison Artillery as a gunner.

Returning to the R.C.A after the war had finished Austin shared diges in Fulham (no. 58 Wandsworth Bridge Road, SW6) with his fellow student print maker Tennant who recalled:

The window of the room gave onto all the back of the surrounding houses and gardens.

His print â€˜Springtime at Fulhamâ€™ was made from this window.  You will see in this that all the brick walls come together, meeting at a sort of cross roads in the foreground. This used to be a regular rendezvous for all the cats in the neighbourhood and sometimes their howling did get a bit of a nuisance at night.  Eventually we got fed up and made ourselves two catapults.  We used to gather pebbles when we were out and keep a store on the window sill.  As we had both been gunners we practised â€˜rangingâ€™ on the cross roads at the top of the brick walls in daylight. With practise we managed to get the right elevation for our catapults so that we could land the pellet, in the dark, somewhere near the target.. p 5

Austin's early plates show an extraordinary sweetness of line and often, as in his large plates of deer, beautifully unified compositions.  There is in the best sense an academic quality about these, very proper in a man who was virtually a pioneer in his his art today.  About 1929 a close study of the German masters of engraving is evident.  But Austin has passed through his probationary stage and is master not only of his technique, in which no English engraver has surpassed him, but also in using his medium in a native, personal way. Already Mr Dodgson had noticed in his work 'an aftermath of Pre-Raphaelitism...with its harking back to the past and its wealth of realistic detail.'

Austin's latest plates are contemporary in subject.  At the same time his interest in Millais, the Millais of book-illustrations, is explicit.  Surely this strain, at once homely, intimate and romantic, is at the centre of the tradition of English art.  Austin's line remains clear: his tone is given by a number of short flicks and shadings.  He is thus nearer in technique to the fifteenth-century German engravers than to Durer or Lucas van Leyden. In drawing and composition there is nothing archaic. Of recent years he has produced three or four plates regularly each year.  Of these one or two commonly represent new treatments of subjects previously treated in a rather different way.  He is fascinated with certain subjects, bells, stairs, kneeling figures, weathered wood.But he also advances to new subjects; in 1936 two very fine portraits and in 1937 the Young Mother.