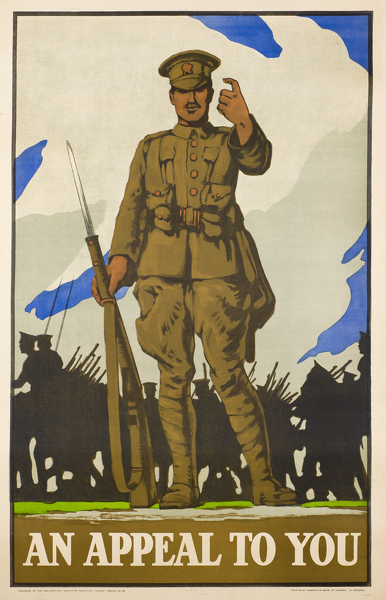 Fifty-four million copies of some two hundred different posters were produced and distributed by the  Parliamentary Recruiting  Committee over the course of the war. Millions more were produced by other wartime (often private) organizations. As  one  Londoner observed in January 1915: “Posters appealing to recruits are to be seen on every hoarding, in most shop windows, in omnibuses, tramcars, and commercial vans. The great base of Nelson’s pillar is covered with them.”
War posters were intended to be ephemeral and never meant to be archival or historical documents – as a result of this many are incredibly rare..  In the United Kingdom posters were distributed by professional agencies – in America the job of Bill Posting was left to the Scouts (who proved less effective), for which reason more copies of  American (undistributed) posters have survived.