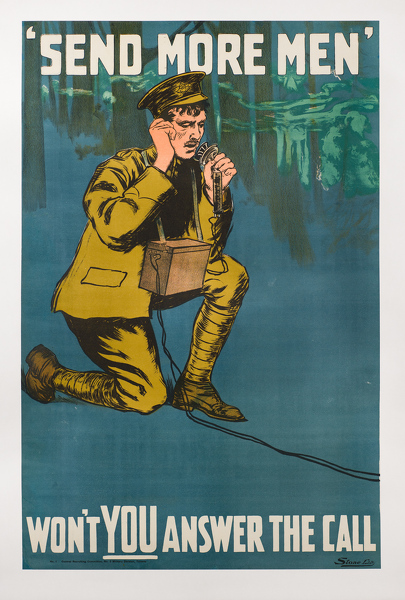 Field telephones were first used in the First World War to direct troops. They replaced flag signals and the telegraph as an efficient means of communication but they  depended upon the laying of land lines. The first field telephones had a wind-up generator, used to power the telephone's ringer & batteries to send the call.. These early telephone systems were not mobile, so radio (a development from the telegraph, and then known as the 'wireless' because it was not dependent on external electrical wiring) also played a crucial role in communications - although radio sets were not very portable either.

The British declaration of war automatically brought Canada into the war.  As a British dominion howeve, the Canadian government had the freedom to determine the country's level of involvement.  On August 5, 1914, the Governor General declared a war between Canada and Germany. The Militia was not mobilized and instead an independent Canadian Expeditionary Force was raised.

The highpoints of Canadian military achievement during the First World War came during the Somme, Vimy, and Passchendaele battles and what later became known as "Canada's Hundred Days". Canada's total casualties stood at the end of the war at 67,000 killed and 250,000 wounded, out of an expeditionary force of 620,000 people mobilized (39% of mobilized were casualties).