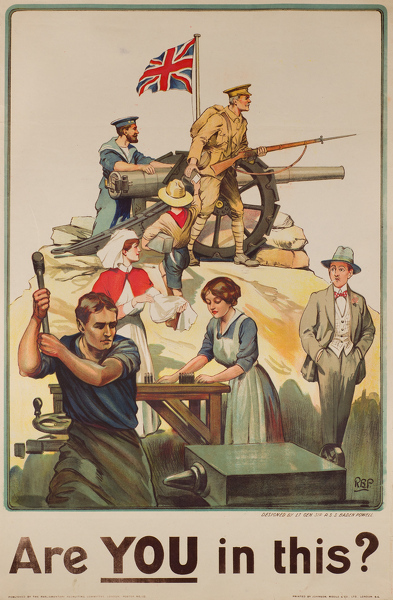 
Robert Baden-Powell:
Are YOU in this? 1915
Framed (ref: 5991)
Signed with initials in the plate
Original Parliamentary Recruiting Committee poster No 112
printed by Johnson Riddle 1915
76 x 51 cm


Best known as B-P, and as the father of the Scout movement,  Baden-Powell was also an accomplished artist and it is therefore not surprising that the Parliamentary Recruiting Committee commissioned him to design this poster.  Whilst the image is usually interpreted as a call for the unity of all classes in a common aim, the well-dressed civilian on the right, strolling out of the picture, might equally be seen as, from his casual demeanor and fine dress, as someone profiteering from the war and avoiding his duty;(conscientous objectors were frequently referred to as Shirkers).
Before the First World War there had never been compulsory military service in Britain. The first Military Service Bill was passed into law in January 1916 following the failure of recruitment schemes to gain sufficient volunteers in 1914 and 1915. From March 1916, military service was compulsory for all single men in England, Scotland and Wales aged 18 to 41, except those who were in jobs essential to the war effort, the sole support of dependents, medically unfit, or â€˜those who could show a conscientious objectionâ€™.