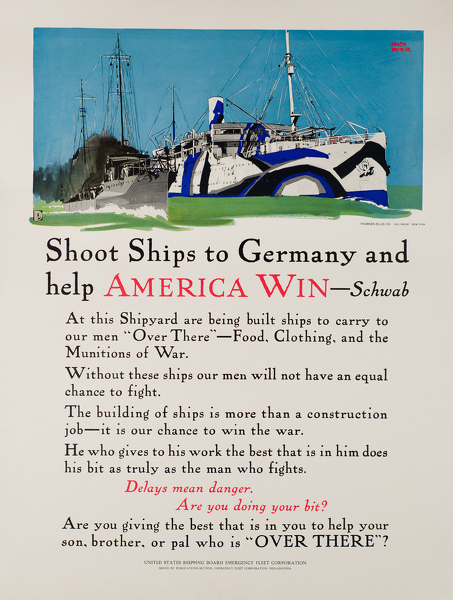 The United States was a formal participant in World War I from April 6, 1917 until the war's end on November 11, 1918. Before entering the war, the US had remained neutral, though the US had been an important supplier to Britain and other Allied powers. During the war, the US mobilized over 4,000,000 military personnel and suffered 110,000 deaths, including 43,000 due to the influenza pandemic

The Poster shows two ships at sea, the larger one painted in dazzle camouflage, with text quoting Charles M. Schwab an American steel magnate  who on April 16, 1918 was made the Director General of the Emergency Fleet Corporation.  At this shipyard are being built ships to carry to our men "over there" - food, clothing, and the munitions of war. Without these ships our men will not have an equal chance to fight. The building of ships is more than a construction job - it is our chance to win the war. He who gives to his work the best that is in him does his bit as truly as the man who fights. Delay means danger. Are you doing your bit? Are you giving the best that is in you to help your son, brother, or pal who is "over there"?.

Dazzle camouflage, whose invention is generally credited to the artist Norman Wilkinson, consisted of complex patterns of geometric shapes in contrasting colours, interrupting and intersecting each other.Unlike other forms of camouflage, dazzle works not by offering concealment but by making it difficult to estimate a target's range, speed and heading. Norman Wilkinson explained in 1919 that dazzle was intended more to mislead the enemy as to the correct position to take up than actually to miss his shot when firing.