Harold M. Brett: A Destroyer on a night time naval encounter, circa 1915 - on Art WW I 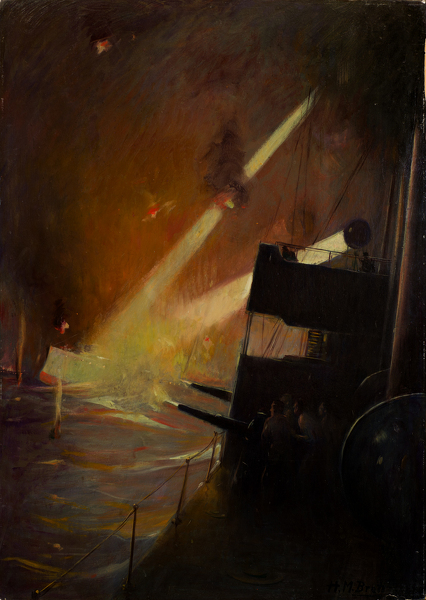 Scenes of the people and incidents of the New England coast were amongst Harold Brettâ€™s favourite subjects. As early as 1907, while studying under Howard Pyle in Wilmington, Delaware, he and Henry Peck travelled together to make studies of the United States Coast Guard for his paintings. These were reproduced in Life Savers on Old Malabar by William Inglis, in Harper's Monthly Magazine, January 1908.
Brett moved to Chatham, Massachusetts in 1915. It is here that he illustrated several books by Joseph C. Lincoln, whose stories were set in a fictionalized Massachusetts peninsula, as well as undertaking a portrait series of Cape Cod sea captains. He is believed to have painted 'A Detroyer on a Night-time Naval Encounter' at this time, perhaps inspired by the activities of the newly opened Chatham Naval Air Station.
Whilst there is no evidence that Brett spent time in Europe during World War I, he illustrated a number of scenes of soldiers in action, including a view of American infantrymen in a  trench, in the collection of Delaware Art Museum. There are also posters â€“ after his paintings â€“ showing various maritime scenes from WW1 in the Albany Institute of History & Art.