Charles Cundall: The Meta Sudans in Rome as a War Memorial, early 1920's - on Art WW I 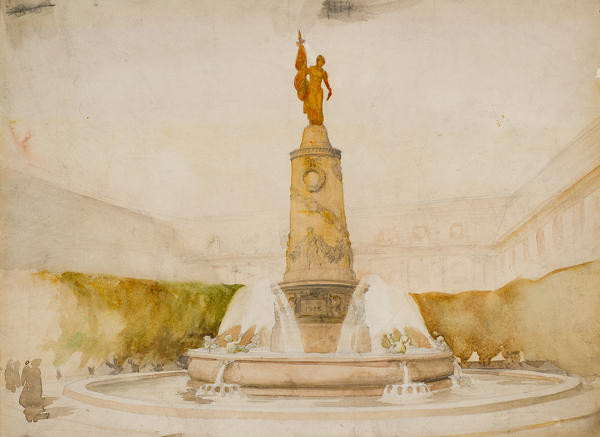 This watercolour is a 'capriccio', a re-elaboration of the ancient Rome Meta Sudans fountain with a laurel wreath and a statue and a plaque dated 1918 added in the manner of a war memorial.  The ruins of Meta Sudans -  though only its brick and concrete core - survived until 1936 when Mussolini had its remains demolished and paved over to make room for the new traffic circle around the Colosseum. Having served during the war in The Artist's Rifles Cundall was invalided out in 1916, wounding  his right arm, as a result of which he had to learn to paint thereafter with  his left hand.  In the early 1920's Cundall married a fellow student N.J.Pietersen and they travelled together through France and Italy when this watercolour is likely to have been produced.
Provenance: The Phoenix Gallery, Lavenham