Ludovic-Rodolphe (RODO) Pissarro: Business as usual during the alterations of the Map of Europe, circa 1915 - on Art WW I 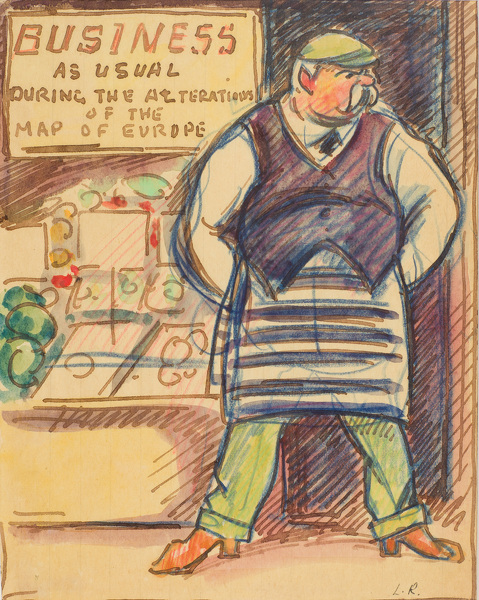 
Ludovic-Rodolphe (RODO) Pissarro:
Business as usual during the alterations of the Map of Europe, circa 1915
Framed (ref: 5962)
Signed with initials
Watercolour 17 x 13.5 cm

One of a series of scenes Ludovic Pissarro observed whilst living in London during the War this watercolour shows a defiant Greengrocer outside his shop window in which a poster pronounces 'Business as Usual During the Alterations of the Map of Europe'.
Although food shortages did occur at the start of the war, due to panic buying, Britain  continued to successfully import food (mostly from America and Canada) with Merchant Ships traveling in relative safety across the Atlantic up until 1916. However, in 1917, the Germans introduced unrestricted submarine warfare and merchant ships were sunk with great frequency causing the shortages that led to the imposition of rationing in February 1918.