Robert Austin: Private with bandage, travelling in a railway compartment, circa 1918 - on Art WW I 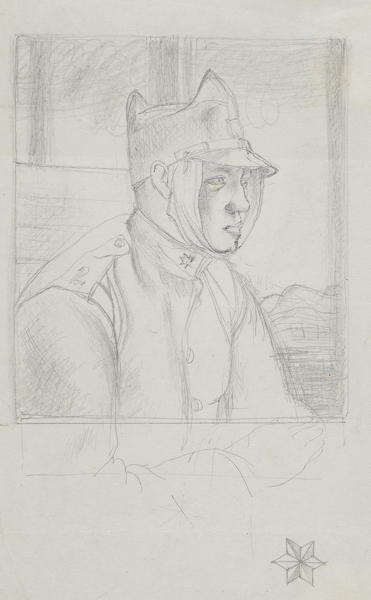 During WW1 Austin served in the Royal Garrison Artillery as a gunner.

He had been at the Royal College for a brief spell before the outbreak of the war and resumed his studies afterwards.

The Soldier, in Austrian uniform, would appear to be a Private 1st Class of the 2nd Infantry Regiment.

Millions of soldiers suffered “shell shock,” or posttraumatic stress disorder, due to the horrors of trench warfare. Shell-shocked men often had uncontrollable diarrhea, couldn’t sleep, stopped speaking, whimpered for hours, and twitched uncontrollably. While some soldiers recovered, others suffered for the rest of their lives