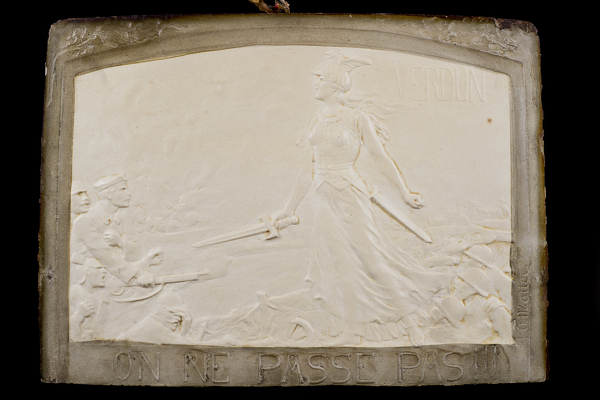 Fought from 21 February to 18 December 1916 the battle resulted in nearly one million casualties. In April 1916, PÃ©tain had issued an Order of the Day, "Courage! On les aura" ("Courage! We shall get them") and on 23 June 1916, Nivelle issued: "They shall not pass", a simplification of the actual French text: "Vous ne les laisserez pas passer, mes camarades" ("you will not let them pass, my comrades").
A French lieutenant at Verdun who was later killed by a shell, wrote in his diary on 23 May 1916 "Humanity is mad. It must be mad to do what it is doing. What a massacre! What scenes of horror and carnage! I cannot find words to translate my impressions. Hell cannot be so terrible. Men are mad!"
This original plaster maquette would have subsequently been cast in an edition of bronze and sold as a souvenir of one of the longest and mostly costly battles in human history.