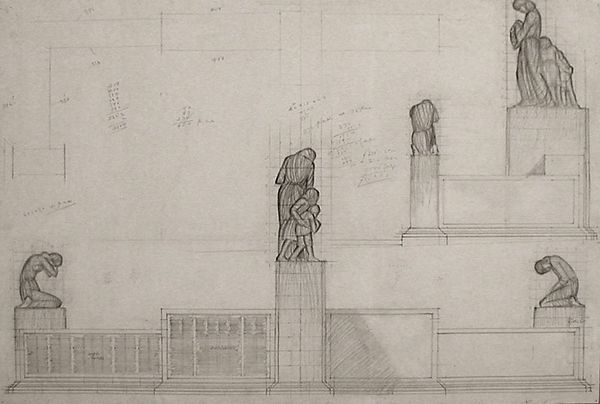 Judith Collins in Eric Gill: the Sculpture (Herbert Press, 1998) devotes a whole
section to the artist's War Memorials.
Collins records that after the First World War and the setting up of the
Imperial War Graves Commission, Gill was asked to make several public war
memorials.

War memorials by Gill as a focal point for villages across Britain include
those at Trumpington near Cambridge, Bryantspuddle in Dorset, South
Harting in Hampshire, Bisham in Berkshire and Chirk in North Wales.
Gill took these projects particularly seriously as is evident from a letter that
he wrote to the Burlington Magazine , which was published in the April issue
of 1919.

Gill objected to 'the strange contention that we are a Christian Empire' and
the way that this led to the proposal 'not only to put up crosses at central
monuments but even sham altars.'
He also reacted to plans to standardize the lettering on memorials and
headstones.

The present drawing for a war memorial is notable for its large size and its
degree of finish. Including not only an exploration of the way that the figures
would read from different viewpoints, it also incorporates Gill's suggestions
about where to place the names of the fallen, as well as proposed costings for
the monument.