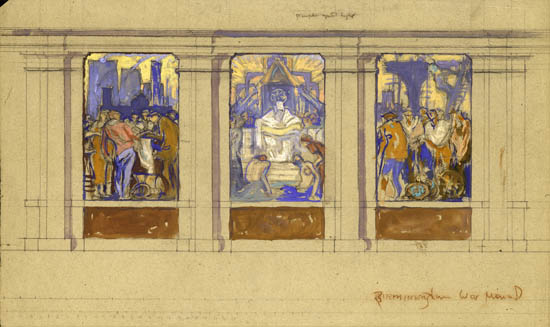 Brangwyn's assistant Frank Alford noted in his diary in July 1921 that Sir Aston Webb discussed with Brangwyn a mosaic memorial to ex-soldiers, consisting of three panels. The project never came to fruition and this is the only known study for it.

Waldron West, a portrait painter who was born, trained and worked in  Worcestershire, was profoundly influenced by Brangwyn .  West befriended Brangwyn in the  late 1930's and as part of his friendship acquired, over the next two decades, a number of works from his mentor.

We are grateful to Dr. Horner for assistance.  This drawing will appear as reference M4898 in her forthcoming catalogue raisonne.