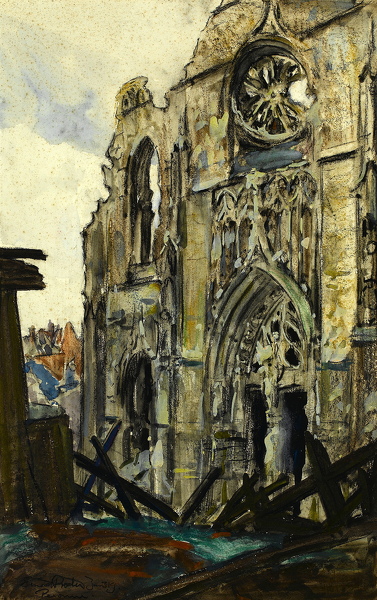 Crayon and gouache on paper

Between 1916/17 Procter was a member of and official artist for the Friends Ambulance Unit (FAU) in Dunkirk, a voluntary organisation founded by individual members of the British Religious Society of Friends (Quakers), in line with their PeaceTestimony.The FAU operated from 1914-19 and was chiefly staffed by registered conscientious objectors such as Procter . Altogether it sent more than a thousand men to France and Belgium, where they worked on ambulance convoys and ambulance trains with the French and British armies. Procter later served on theWestern Front with two units of the Section Sanitaire Anglaise, at Nieuport Bains and at Verdun. He was appointed Official War Artist for the Ministry of Information from 1918/19

Peronne, in Northern France, is close to where the Battle of the Somme took place.  This watercolour shows the flamboyant Gothic west front of the Eglise Saint-Jean-Baptiste which by 1917, like most of the town, had been almost entirely destroyed.