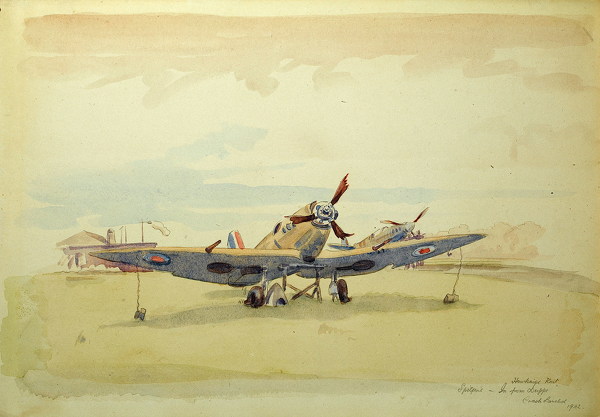 Literature: WW2 - War Pictures by British Artists, Edited by Sacha Llewellyn & Paul Liss, July 2016, cat 149, page 190.
Looking a little sorry for themselves but eager to get back to the fight, these S
pitfires await the skilled attention of RAF mechanics.  Wherever possible
aeroplanes were repaired rather than being Struck Off, but the work involved
was painstaking and the entire airframe needed to be examined to make sure
there were no hidden structural failures.  As they will be standing out in the
open for some time, the aircraft are picketed in order to stop them blowing
over in any storm that might pass.
The technology of propellers had advanced a great deal during the 1930s
and, in fact, they had developed into airscrews.  Props had fixed blades,
whereas airscrews had blades mounted into hubs and controlled by
hydraulics enabling the pitch of the blade to be altered in flight.  This enabled
a coarse pitch to be used for take-off when the blades needed to slice deeply i
nto the air to build up speed as quickly as possible to get the aircraft off the
ground.  When aloft, fine pitch was selected for fuel-economy when cruising at
altitude.
The Spitfire in the foreground clearly had blades made from laminated wood
which broke when it nosed-over in a rough landing.  The aircraft in the
background had a metal-bladed airscrew, but these blades could be
straightened, trued-up and re-fitted.
We are grateful to Andrew Cormack for assistance.