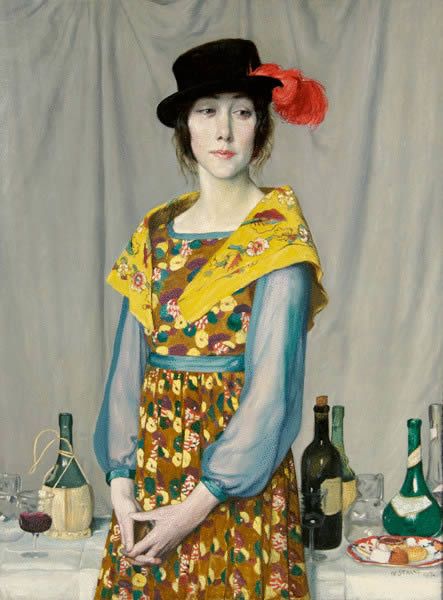 Exhibited: The exhibition of the International Society of Sculptors, Painters and Gravers, Grosvenor Gallery, June 1917; The Carneigie Institute, 1917 (?)

PG Konody singled out The Buffet when reviewing The exhibition of the International Society of Sculptors, Painters and Gravers, Grosvenor Gallery, (The Observer, 17th June 1917) as one of a few works that made 'an unusually striking display':

The charm and refinement that have so often been found lacking in Mr. Strang's works are conspicuously present in the figure of a woman with piquant features, in a gay print dress of the type vaguely called 'futurist' with light blue gauzy sleeves and a bright yellow neckerchief, 'The Buffet'. 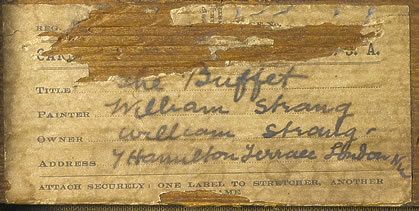 From a painting of the same woman in the Manchester City Art Gallery, dating to 1916, the model can be identified as Panchita Zorolla, , 'a striking portrait with that bare 'thrown' attractiveness with which this artist has plainly hinted that some day or other he will produce a masterpieceâ€™ ( Spectator review , volume 117).

C.R. Ashbee, who sat for Strang, recalled that:

....in each of his portraits there is some touch of his sitters' ugliness revealed in the beauty of the draughtsmanship....those of us who ...have sat for our portraits and prize the results....are also grimly conscious of an unpleasant something in ourselves that we don't mention but that our love of truthfulness would not have us conceal...they have the quality of Dr Johnson, they are lexicographical (CR Ashbee, unpublished typescript of memories, Victoria and Albet Museum, vol IV, p. 71, quoted in Athill, William Strang, 1981, p 22) 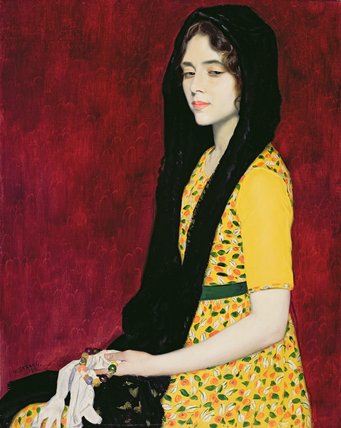