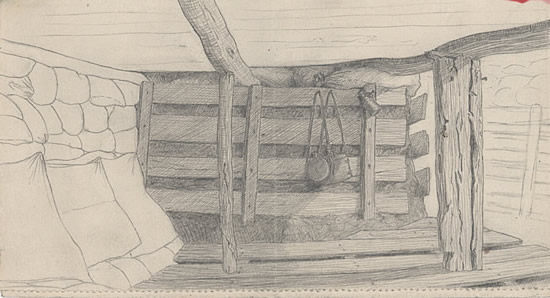 This is the Original Sketch for a water colour in the collection of The National Army Museum showing Kelly's own Forward Observation Post Dugout at the Indian Village, Festubert, June 1915.

The Battle of Festubert (15â€“25 May 1915) was an attack by the British army in the Artois region of France on the western front during World War I. The offensive formed part of a series of attacks by the French Tenth Army and the British First Army in the Second Battle of Artois (3 May â€“ 18 June 1915).

Talbot Kellyâ€™s account of the FirstWorldWar is recorded in A Subalternâ€™s
Odyssey (1980).