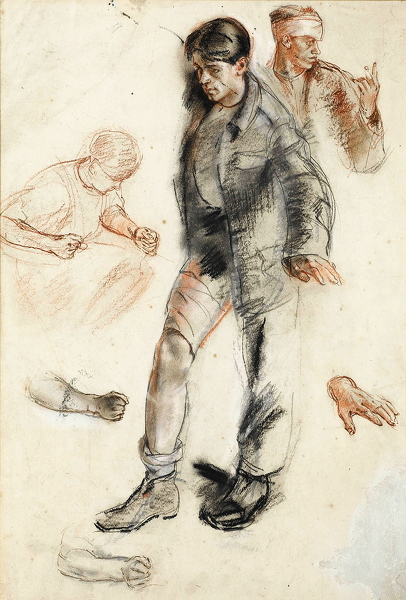 The First World War created major problems for the Armyâ€™s medical services. Ideally, the wounded first made it to a Regimental Aid Post, then on to a mobile Advanced Dressing Station. Here, often in appaling conditions, injuries might be cleaned and dressed, injections given and emergency amputations carried out.The next stop was a Casualty Clearing Station (CCS), where more substantial aid could be given several miles behind the front line.

In 1918, the Ministry of Information commissionedTonks to paint a large single picture, An Advanced Dressing Station in France, now in the collection of the Imperial War Museum (see picture below), for which this is a study. Tonks had been both a surgeon and art teacher at the Slade before the war. In the early years of the war he was a civilian doctor in France and Italy. In 1916 he joined the Royal Army Medical Corps, working in Sidcup with Sir Harold Gillies, one of the pioneers of plastic surgery).

A series of related drawings are in the collection of the Hunterian Museum, (Royal College of Surgeons, London) and are considered one of the greatest treasures of the College's collection. The collection consists of 72 pastel portraits of patients treated by Gillies and his team. Some are single portraits; others combine to show the same patient at different stages of treatment. Many are shocking in their depiction of the terrible injuries suffered, but all are characterised by an astonishing sensitivity. The drawings are works in pure pastel, drawn without scale, squaring or construction lines directly from the life. The drawings are heavily worked, with layer upon layer applied to obtain saturation of colour and depth.

Henry Tonks was uniquely qualified to take on the role of Gilliesâ€™ assistant. Originally trained as a surgeon, Tonks had qualified FRCS in 1888 before abandoning medicine to follow a career as an artist. As a teacher at the Slade School in London Tonks developed his interest in life drawing, building on the anatomical expertise acquired during his early career. At the start of the First World War Tonks returned to service as a medical orderly, before being appointed an artist to a new unit set up by Gillies to deal specifically with facial injuries. He was one of several artists, sculptors and photographers called upon by Gillies, who recognised the value of combining different mediums to provide a more rounded record of his patients. In this â€“ as in much else â€“ Gillies was a pioneer: today his work at QMH is regarded as a pivotal period in the development of modern plastic surgery. As well as important technical innovations in operative technique, anaesthesia and nursing Gillies also recognised the importance of psychological care. The Tonks Collection, which is simultaneously a technical record of surgical progress and a series of highly personal portraits of individual patients, is therefore a fitting record of this ground-breaking approach.
About the project