Hubert Arthur Finney: View of wing from the inside of an aircraft, circa 1945 - on Art WW I 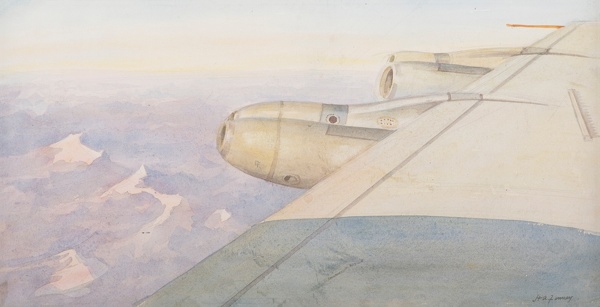 
Signed. pencil and watercolour on paper.

Between March 1977 and November 1978, Finney produced a 63-page memoir in which he examined his life from early childhood to his experiences serving with the Civil Defense during the Second World War. The extract below is taken from this manuscript:

'During the early part of the Battle of Britain, I would go down to an Anderson shelter in the garden of the house, in which I rented a room and the tenant above me a woman with two young children also shared the shelter through the long night while the German planes did what they liked in the sky above because except for barrage balloons and our little aircraft fire we had no defences in the beginning of the second year of the war. On the night of the great fire of London when I would see the red glow increasing over central London, It was my day off from duty, and when I was in my room at Hammersmith I could hear the German planes approaching at about 6:30 pm and I watched the fire gradually increasing around the city cen-tre and this went on until almost midnight.To pass the time away, being on my own I put a records on, the record of Casals playing Bach’s “Come Sweet Death” was my favourite one.'

Finney exhibited with the Civil Defence Group of artists throughout the war, and his soft, aerial views added a distinctive element to these shows. He returned to the subject of aircraft as a source of inspiration for his compositions throughout his career