Charles Henry Tenré grew up in the wealthy Parisian suburb of Saint-German-en-Laye.  Although his formative years are largely undocumented, Tenré’s later paintings demonstrate a familiarity with comfortable bourgeois interiors that hint at a personal acquaintance with this type of environment. In Tenré’s time, the bustling suburb was also home to the young Claude Debussy and the painter Maurice Denis. Tenré’s artistic education undoubtedly began in part at the local Musée des Antiquités Nationales, which opened at the château in 1867.  The Gallo-Roman antiquities would have served as classical models for the young artist, training his eye and his sensibility in the traditional French aesthetic.  By the early 1880s, Tenré was already studying in Paris at the Ecole des Beaux-Arts where he studied under a variety of instructors.  First was Edmond Yon who was primarily a landscape painter working in a 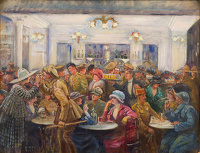