Ludovic-Rodolphe Pissarro was born in Paris on the 21st November 1878 and was Camille Pissarro’s fourth son. He soon became known as Rodo and usually signed his work Ludovic-Rodo. The impact of Camille’s art and teaching on Rodo was obviously considerable, and his artistic production encompassed a wide range of media, including oil painting, tempera, watercolour, gouache, wood engraving, drawing and lithography. He also exhibited regularly at the Salon des Indépendents over a forty year period.In 1894, at the age of sixteen, Rodo published his first wood engravings in the anarchist journal, Le Pere Peinard, and when Camille left France for the safety of Belgium during the anarchist upheavals of that year Rodo joined him there.Rodo moved into his first studio in Montmartre with his brother Georges in 1898 and found the night-life of Paris, and the habitués of the cafes, theatres, circuses and cabarets of the area, compelling s

Ludovic-Rodolphe (RODO) Pissarro
Back to the Land "Farming" 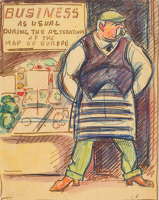 Ludovic-Rodolphe (RODO) Pissarro
Business as usual during the... 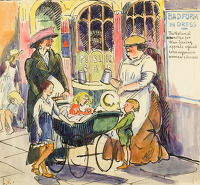