Born in Bedford, Wells studied at the Slade School of Fine Art under Henry Tonks, Philip Wilson Steer and Walter Westley Russell before going on to continue his studies in Paris. On his return to London he was elected a member of the Royal Society of British Artists in 1906, at the very young age of 25. (He became Vice President of the Society in 1955). During World War I he joined the Artist’s Rifles as a commissioned officer and served in France for the duration of the war. By World War II he was too old for regular service and instead he served as an air raid warden. In order to record the bombed city he would often make his watercolour drawings of the ruined buildings in the morning following an air raid. In the years following the war his dismay at seeing the London he knew and loved left in ruins and then being altered by post war planners and developers led him on a mission to record the changing streets and buildings befor 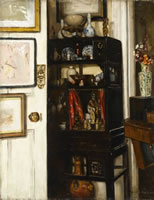