John Tunnard: A point on the horizon line - on Art WW I 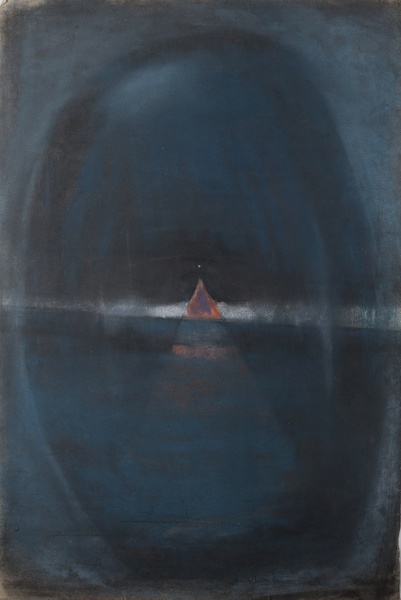 Provenance: Private collection of works by John Tunnard, (part of which was offered for sale at Christies 1st March 2006)

Semi-abstract shapes which bring to mind distant horizons, the sea, moons, stars, planets, birds in flight, trees and skeletal forms characterise much of Tunnards oeuvre. This was especially so in the case of Tunnards 30 foot long Crystal Forms mural, created for the Festival of Britain in 1951 and displayed in the Regatta Restaurant on the South Bank, London, (now destroyed).

He worked in a variety of media including oil, tempera, gouache, watercolour and pastel.

Tunnard's  first major exhibition, held in 1932 at the Redfern Gallery, featured landscapes, marine scenes and still life. From the mid-1930s, however, he began to paint abstract works influenced by the styles of Joan MirÃ¯Â¿Â½ and Paul Klee, and further embraced British surrealism on reading Herbert Read's Surrealism.

Tunnard had a solo exhibition at the Guggenheim Jeune gallery in 1938. In her autobiography, Peggy Guggenheim described his colour as  exquisite :I was happy to think that I had discovered a genius."

Tunnard's compositions, with their Neo-Romantic sensibility, are  often compared to that of Graham Sutherland. In later life he became interested in space travel  depicting satellites and moonscapes in his paintings.