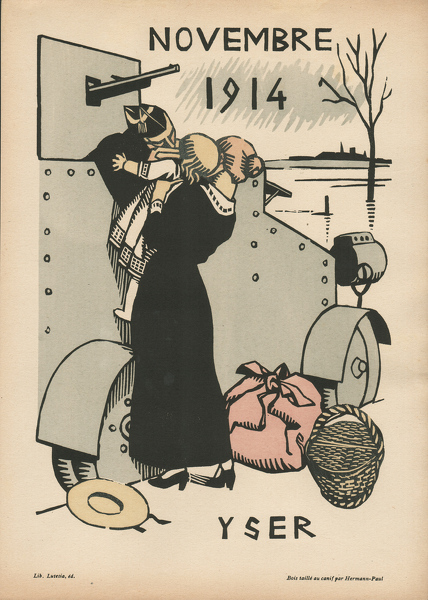 This complete set includes twelve colored woodcuts each representing a month of the first year of the Great War from August 1914 until July 1915.

Each month is represented by a place, a battle or an event such as mobilization. Women figure prominently in most of these images.

The Battle of the Yser took place in October 1914 between the towns of Nieuwpoort and Diksmuide along a 35-kilometre long stretchof the Yser river. The front line was held by a large Belgian force which succeeded in halting the German advance, though only after

heavy losses. After two months of defeats and retreats, the Battle of Yser finally halted the invasion that gave Germans control of over 95% of Belgian territory. Victory in the battle allowed Belgium to retain control of a tiny part of its territory making King Albert a