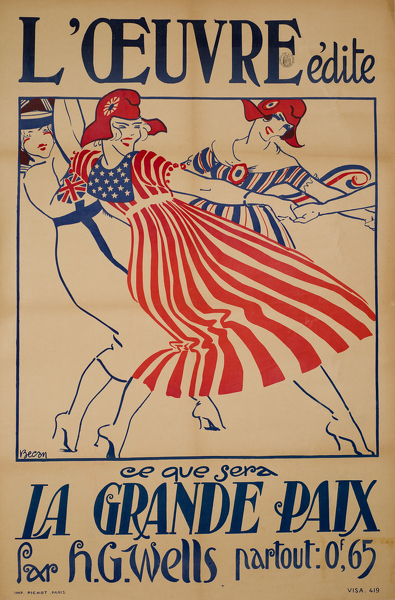 Wells  supported Britain in the First World War despite his many criticisms of British policy, and opposed, in 1916, moves for an early peace. In an essay published that year he acknowledged that he could not understand those British pacifists who were reconciled to "handing over great blocks of the black and coloured races to the [German Empire] to exploit and experiment upon" and that the extent of his own pacifism depended in the first instance upon an armed peace, with "England keep[ing] to England and Germany to Germany".

Three young women, representing Britain, the United States of America and France, dance together in a circle, holding hands with another, partially visible, woman. Their nationality is indicated through their clothing, which is decorated in the colours or patterns of their country's flags. The American and French women also wear Phrygian caps.