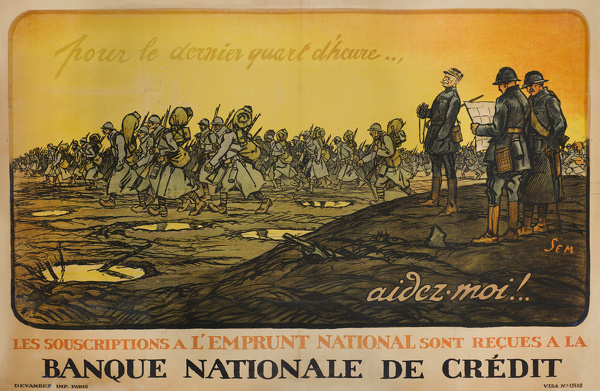 General  Foch appears overseeing his troops as they march across the battlefield. Foch was appointed commander in chief of the Allied armies in 1918.
Georges Goursat (1863â€“1934), known as Sem, was a French caricaturist famous during the Belle Ã‰poque. Aged over fifty at the start of World War I, Goursat was not drafted. He nevertheless involved himself as a war correspondent for Le Journal.  In 1916 and 1918 he published two albums of Croquis de Guerre (War sketches).  He also designed posters for war bonds.
War loan posters were almost certainly the largest category of posters produced between 1914 and 1919. They appealed to civilians' desire to aid the war effort rather than to any monetary value to be gained and were produced by all major countries and usually issued in series.  Subscribers were often given a copy of the actually poster, hence the large number that surivive compared to other war posters.  In France they were known as  Emprunt National.  In America they were referred to as Liberty Bonds, in Canada as Victory Loans, and In the United Kingdom as War Loans.