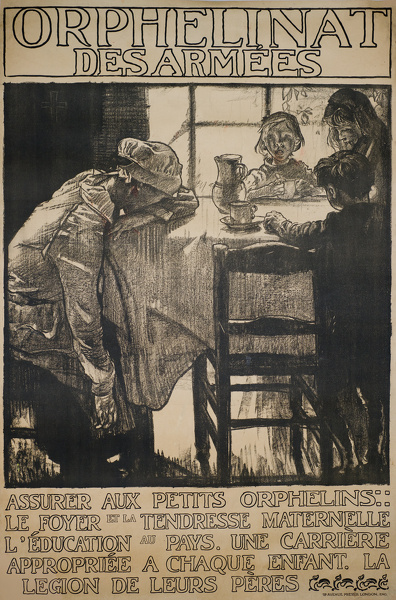 At the start of the First World War, more than a million Belgian refugees fled the advancing armies, seeking sanctuary abroad.  Around 250,000 made it to England – one of the largest groups of refugees in British history - and found a sympathetic welcome. Local relief committees formed all over the country, raising funds to sustain them during their time in exile.
The exhibition takes its title from a poster designed by Frank Brangwyn (1867-1956) for the Belgian & Allies Aid League. “Will you help these sufferers from the war to start a new home”, it asks. “Help is better than sympathy.”
Bruges-born Brangwyn, already a well-known and successful artist before 1914, became a prolific poster-maker during the war and his designs became synonymous with First World War propaganda. Many present the horrors of the war, while others aim to recruit soldiers and vilify the enemy.  One propaganda poster in particular was so violent that the German Kaiser allegedly put a price on Brangwyn’s head.
Help is better than sympathy presents some of Brangwyn’s best known posters, including ‘The Retreat from Antwerp’, alongside lesser known work. Shown together they offer an opportunity to examine Brangwyn’s attitude to the First World War, and the Belgian refugees in particular, using the Gallery’s rich collection.