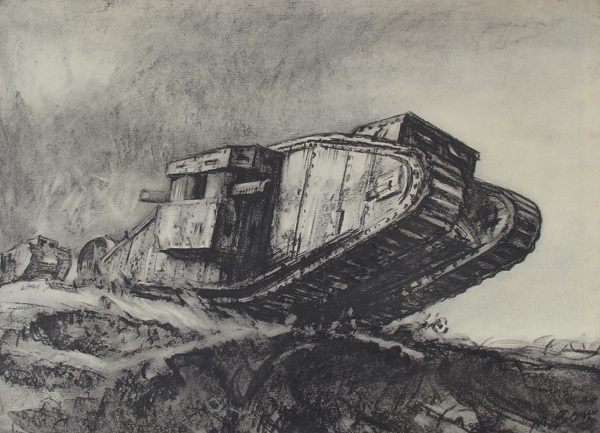 
At the outbreak of war, Charles Masterman, head of the British War Propaganda Bureau, acting on the advice of artist William Rothenstein, appointed Bone as Britain's first official war artist.  He was sent to the Front in August 1916 (the first of two visits to the Front) at the height of the Somme Offensive and toured the Southern battlefields working rapidly in various media - pencil, pen, charcoal and chalk - sending back, by October, over 150 finished drawings. Country Life published several folios of these striking drawings. The two principal publications were   'War Drawings'  and 'The Western Front.' War Drawings, consisting of  a  series of  six  volumes with ten images in each, published by Authority of the War Office,  were  issued by Country Life in 1917.  The Western Front  a monthly publication by Country Life produced  between 1916 and 1917, contained  200  images, issued in ten monthly parts, each  containing 20 plates. These were captioned on the facing page with text by C.E. Montague and prefaced by a short introduction by General Head Quarters ; it is believed that the introduction to the first part was written personally by Douglas Haig.  The original parts were later combined and sold as two bound volumes (volume one comprising parts 1 - 5 and volume two parts 6 - 10). The parts were sometimes loosely themed, e.g. 'Trench Scenery', 'The Battle of Arras'.
Bone donated money derived from the sale of his wartime lithographs to the Imperial War Museum for the purchase of works by other artists, such as Wyndham Lewis, William Roberts and Henry Tonks.
The tank  - or land-ship â€“ was originally designed as a special weapon to solve an unusual tactical situation, the stalemate of the trenches. They first appeared at the Battle of Flers-Courcelette in September 1916 when the British deployed 49 tanks. By 1918 Britain and France had produced 6,506 tanks between them. Germany had produced just 20. Germany learnt to deal with WW1 tanks very effectively.During the Battle of Amiens in 1918 72% of allied tanks were destroyed in just 4 days. 6 days before the end of World War 1 the British Tank Corps only had 8 tanks left.
The Tank became one  an icons of the Great War.  Responding to ts distinctive geometry Charles Sims, Frank Branwyn and Muirhead Bone were just some of the artists who produced major compositions focusing on Tanks in action.