Gerald Spencer Pryse: Poster (without the lettering) for The Nationâ€™s Fund for Nurses â€“ â€˜A Thank-Offering from the British Empire to British Nursesâ€™, c.1915 - on Art WW I 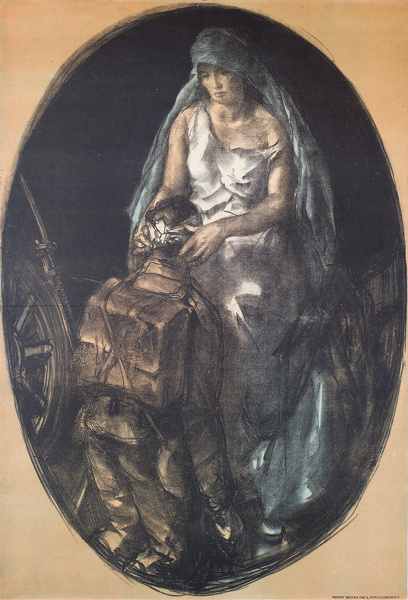 
Gerald Spencer Pryse:
Poster (without the lettering) for The Nationâ€™s Fund for Nurses â€“ â€˜A Thank-Offering from the British Empire to British Nursesâ€™, c.1915
Framed (ref: 5986)

During the Great War, Pryse produced a considerable body of lithographic work, some of it in color under the title Autumn Campaign (1914). This was based in his time in France and Belgium at the beginning of the war when he drove around in a Mercedes carrying lithographic stones in the back. He served as a dispatch rider for the Belgian government and was present at the Siege of Antwerp. The artist wrote a memoir of this time entitled Four Days: an account of a journey in France made between 28 and 31 August 1914, published by John Lane in 1932.

Pryse had made an application to become a war artist, and towards the end of the war, was granted permission to sketch at the front and he was able to record the conditions of trench warfare in numerous water-color drawings, but many of these were lost in the German offensive of 1918. The remaining drawings were exhibited later in London and were described as having "a freshness and authenticity that were not always apparent in the works of the official war artists.  During the war, he also designed a number of posters including several published by Frank Pick for the Underground Electric Railway in London, as well as for the Labour Party, The British Red Cross, and for the Empire Marketing Board. One of his most famous posters, entitled The Only Road for an Englishman shows a regiment of British soldiers marching through a ruined town.