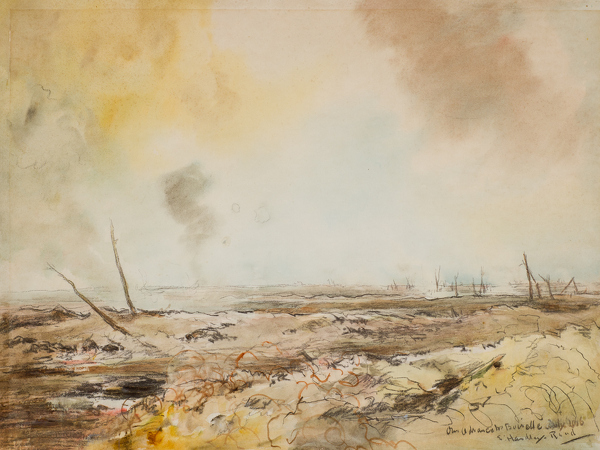 
This painting represents the view from around Keats Redan and looking across Mash Valley, dated around the 17th/18th July and looking towards the ruins of Contalmaison on the horizon.  It was around this area, on the 1st July, that the 2nd Middlesex, the 20th Northumberland Fusiliers, 2nd Devons and the C & B companies who were the advance waves of the 23rd Northumberland Fusiliers (the 4th Tyneside Scottish)attacked the German positions.  Royal Army Medical Corps. records show that on the 17th/18th July there was a German gas bombardment which shows as a mixture of chlorine (yellow/grey/green cloud) and phosgene (colourless) which when mixed may have diluted the clouds sufficiently to produce what was shown in the painting.  This would suggest that Handley Read was capturing the fog of war as much as the devastation on the battlefield. Gas was used by both sides from 1915 as an agent of mass destruction, and was one of the most feared weapons of the war though it actually killed nothing like as many combatants as machine guns or artillery.  Gas might be released near the enemy, either from canisters or by shells, but no-one could control the wind direction and a number of gas attacks ended up blowing back on those who had instigated them.  The horror of gas lay largely in the lingering death or permanent injury it inflicted.
During WWI, the Germans released about 68,000 tons of gas, and the British and French released 51,000 tons. In total, 1,200,000 soldiers on both sides were gassed, of which 91,198 died horrible deaths