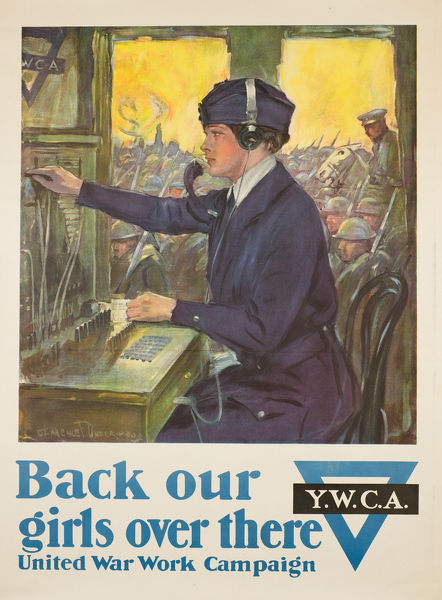 This Young Women's Christian Association,poster for the United War Work Campaign shows a women telephone operator working behind the French Frontline The poster was distributed and printed by the Y.W.C.A., to persuade  primarily young middle-class Christian women to enlist and help in the  War effort.The United War Work Campaign was a combined effort of several organizations, including the Y.W.C.A., to raise money for the war.
“Hello Girls,” as American soldiers called them, were American women who served as telephone operators for Pershing’s forces in Europe. The women were fluent in French and English and were specially trained by the American Telephone and Telegraph Company. In 1979, the U.S. Army finally gave war medals and veteran benefits to the few Hello Girls who were still alive
America alone produced about 2,500 poster designs and approximately 20 million posters - nearly 1 for every 4 citizens - in little more than 2 years.