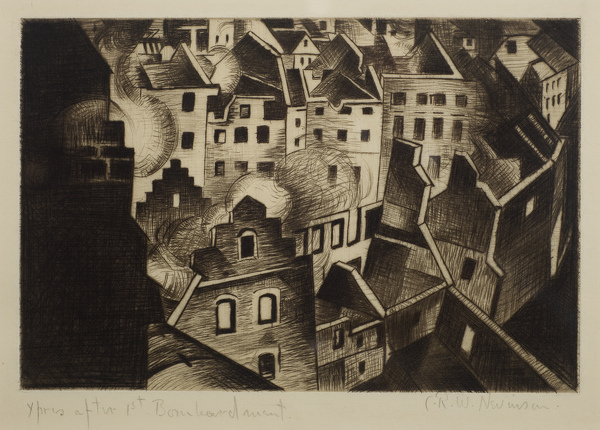 This drypoint was made in the  summer 1916 -a print version of an oil painting exhibited at the London Group in early March 1915. Nevinson probably saw quite a bit of the much shelled Ypres during the second half of November 1914 when he was driving a Mors motor ambulance from the Friends Ambulance Unit's base hospital at Malo-les-Bains (east of Dunkirk) to pick up wounded from a forward dressing station in Ypres and from the small town of Woesten to the north-west of the city. The First Battle of Ypres was coming to an end by late November 1914 but there were still periods of intense shelling in the area - during one of these Nevinson's ambulance was partially destroyed by a near miss while it was parked in the yard of the dressing station at Woesten. In later life Nevinson gave the impression he was actually driving the ambulance when the back part was demolished by a shell-burst. After his ambulance was written off Nevinson was transferred to work as a ward medical orderly at the Malo-les-Bains hospital from early December 1914 to the end of January 1915. The oil of Ypres after the First Bombardment was most likely painted in February 1915 - it's one of his few First World War designs executed in his qualified Futurist manner. The drypoint, first exhibited in Nevinson's first solo exhibition at the Leicester Galleries (September-November 1916), so impressed Paul Nash that while he was at the front in Flanders in March 1917 he wrote to his wife Margaret asking her to buy one if possible. After a recent visit to Ypres Nash thought Nevinson's print had really caught its feeling of abandoned desolation and random destruction.