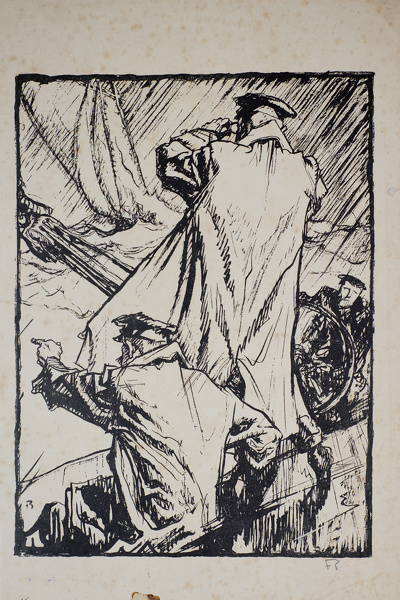 Zambrene were British manufacturers of Officerâ€™s trench coats. The firm prided themselves on the fact that â€œThe proofing employed in all the garments is the famous Zambrene 'Triple â€“ Triple' proofing .  Sir Betrand Dawson, physician to the British Royal family,  declared that â€˜the two great disappointments of the war were not medicine, but the Church of England and the waterproof raincoats' . Brangwyn did at least 4 designs for Zambrene - this one shows  the skipper of a sailing barge (to judge by the block and tackle) peering through binoculars at a similar craft and maybe trying to identify it., The design  was used in a large advertising poster measuring 120 x 180 with the caption â€˜ZAMBRENE RUBBERLESS RAINCOATSâ€™.