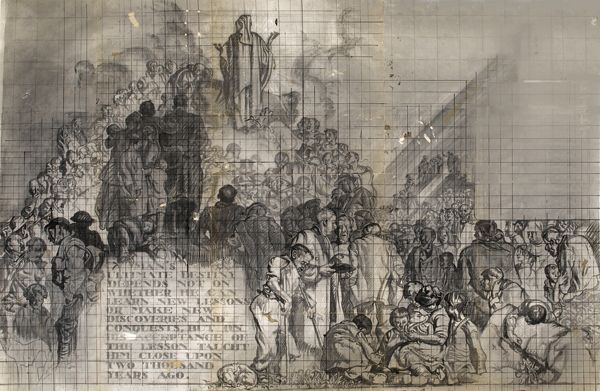 
Squared, with pen and ink and white oil paint highlights

Brangwyn's celebrated murals for the Rockefeller Center adorn the facade of the Comcast building, situated at the heart of the center at 30 Rockefeller Plaza. 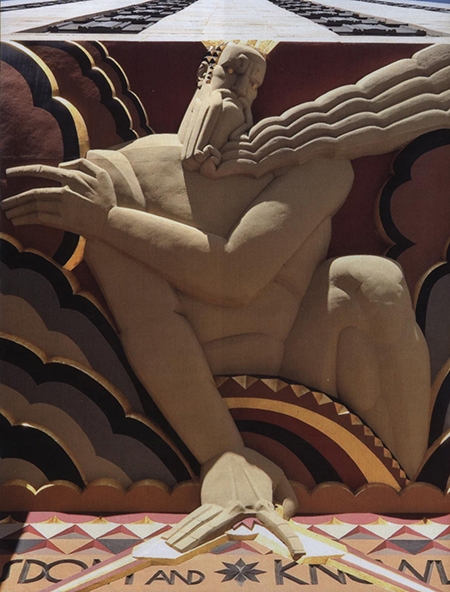 The murals decorate the main atrium around the entrance to the lifts.

This working photomontage, which was probably developed by Alfred Sinden, was worked upon by Brangwyn with multiple grids for enlarging the image on to the final canvas. The cartoon from which the photograph is taken is one of four in the collection of the William Morris Gallery, London Borough of

Waltham Forest. This photograph shows the final composition in which the figure of Christ has effectively turned his back upon Rockefeller.

Picasso and Matisse were originally asked to paint murals for the newly built Rockefeller Centre, but after they declined Brangwyn, the Spanish artist Jose Maria Sert and the Mexican Diego Rivera were subsequently appointed. Critics complained that American artists should have been chosen for such a prestigious commission.

Further controversy followed in May 1933 when Rivera was prevented from ï¬nishing his mural after it was discovered that he had included a portrait of Lenin, and sympathizers of the artist clashed with police outside the building. The authorities also objected to the bright colours of the panel (Sert and Brangwyn had both agreed to paint monochrome works) and the mural was taken down and replaced by a new mural by Sert.

In September 1933, Brangwyn himself faced controversy. Officials from the Rockefeller Center objected to the figure of Christ being included in the fourth panel, representing the Sermon on the Mount.

Raymond M. Hood, one of the architects of the Center, explained that, 'some people here felt that it would not be fitting to put the figure of Christ in a business building. They thought that might be too strong a representation of an individual religion.' It was suggested that Brangwyn represent Jesus by a light shining from heaven. However the artist merely reversed his figure, so that Christ facing the populace became the back of a nameless cloaked man.

In catalogue no. 27, an earlier version of the same composition, Christ faces the viewer.