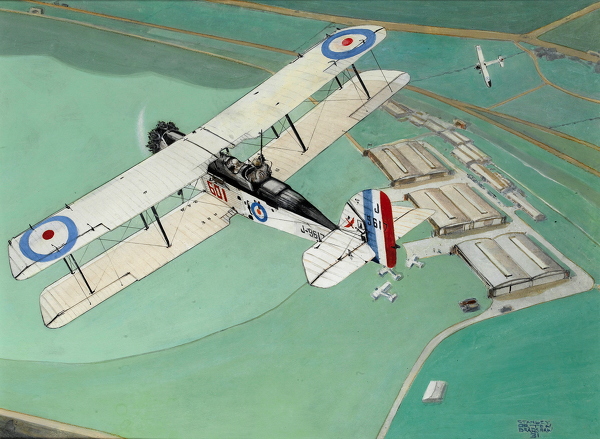 No. 601 (County of London) Squadron was a squadron of the Royal Auxiliary Air Force, based in London. The squadron battle honours most notably include the Battle of Britain and the first Americans to fly in World War II were members of this squadron.
601 Squadron was formed at RAF Northolt on 14 October 1925 when a group of wealthy aristocratic young men, all of whom were amateur aviators, decided to form themselves into a Reserve Squadron of the RAF after a meeting in White's Club, London. The original officers were picked by the first commanding officer, Lord Edward Grosvenor, youngest son of Hugh Grosvenor, 1st Duke of Westminster. Grosvenor tested potential recruits by plying them with alcohol to see if they would behave inappropriately. Grosvenor wanted officers "of sufficient presence not to be overawed by him and of sufficient means not to be excluded from his favourite pastimes, eating, drinking and Whites". The Squadron was initially known as "the millionaires squadron", a nametag gained because of a reputation for filling their ranks with the very 'well-heeled'. Most of these affluent young pilots had little regard for the rigid discipline of the regular service; they lined their uniform tunics with bright red silk and wore blue ties rather than the regulation black. They played polo on brand-new Brough Superior motor cycles, drove fast sports cars (the squadron car park was said to resemble a Concours d'Elegance) and most of the pilots owned their own private aircraft.
From November 1929 to June 1933 the 601 Squadron flew Westland Wapiti Mks.IIa, VI.
We are grateful to Sir Adrian Swire for assistance.