Charles Pears: Freighters passing through an anti-submarine boom, 1915 - on Art WW I 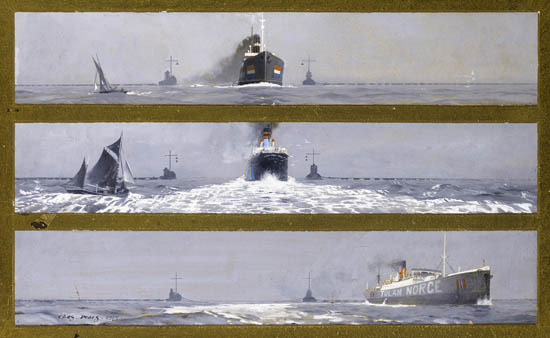 These three images depict freighters passing through the entrance/exit of any anti-submarine defence called a boom - a  series of wire nets suspended underwater from buoys which reach out from either side of an estuary, with a gap left for shipping in the middle that can be closed if/when a submarine attack is expected. In the picture the boom is the dark broken line on the horizon, extending from each side and ending in a more complicated silhouette - in fact a ship, maybe a small fishing trawler,  that flies signalling flags and can close the boom when required. The two freighters steaming forwards have flags painted on the bow - of the Netherlands and Norway - to indicate to the war's combatants that they they belong to neutral nations and shouldn't be attacked. Judging by the Thames sailing barges also in the picture, this could be the Thames estuary, or the Medway, or the Orwell.

We are grateful to Ian Jack for assistance.