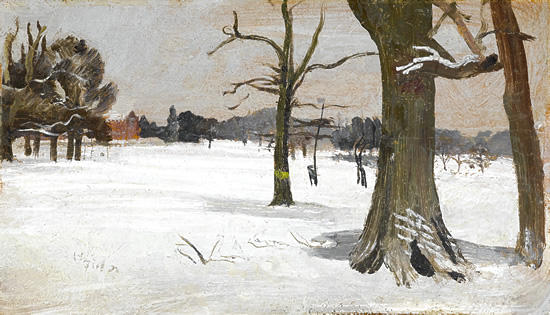 This is possibly the panel exhibited by Sims at the Royal Academy in 1918 under the title April Snow, (533)

In a flat section gilded oak frame with reeded ornamentation to the knull and sight edge.

Sims trained at the Royal Academy School in London, and in Paris in the ateliers of Julian and Baschet. His continental training probably accounts for his fluent handling of paint, and his confident treatment of space and atmosphere. These qualities rapidly gained him critical and academic success. A picture was bought for the Paris gallery of modern art, the Luxemburg, in 1897 and for the public gallery in Sydney, Australia in 1902. He held a highly successful one man show at the Leicester Gallery in 1906, and 'The Fountain' was bought for the Chantrey Bequest in 1908. Academic honours followed. He was elected Associate of the Royal Academy in 1908, Associate of the Royal Watercolour Society in 1911, Member of the Royal Watercolour Society in 1914 and Royal Academician in 1915. He became keeper of the Royal Academy Schools in 1920.

The First World War proved to be a traumatic experience for Sims, from which he never recovered. His eldest son was killed and he was unbalanced by what he witnessed in France where he was sent as a war artist in 1918. His subsequent paintings often show signs of the mental disturbance which led him to resign his post at the Royal Academy Schools in 1926. In 1928, Sims committed suicide.   A posthumous account by Sims, entitled  Picture Making Technique and Inspiration, appeared in 1934, which includes A Critical Survey of Sims Work by his son Alan