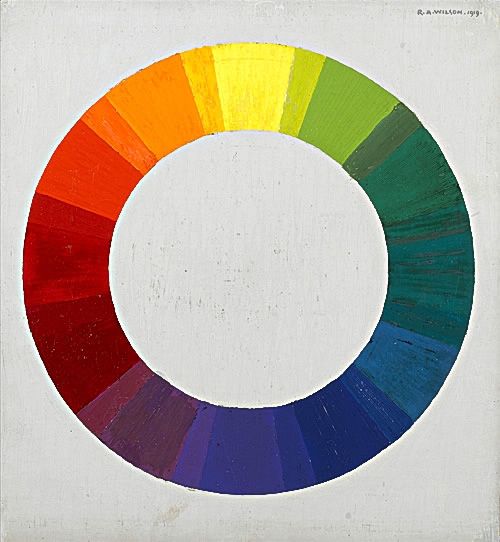 â€˜Great advances were made by the artists of the last generation in the treatment of form and of colour, it is doubtful whether the twentieth century will not be marked by certain discoveriesâ€™ (James Wood, introduction to R.A. Wilson: Exhibition of Paintings and Colour Studies, exh. cat., Guild of Decorators Syndicate, London, May 1922).

Exploring colour harmony was central to Wilsonâ€™s work and a subject on which he wrote and lectured.
â€˜Colour: its meaning and use, logic,mystery, symbolism and powerâ€™ was the title of a BBC radio broadcast talk, given by Wilson in May 1920. Although Colour Wheel shows an awareness of Chevruel's colour theories, its broader symbolism might equally relate to the void left by the war and the power of renewal as suggested by the continuous form of a circle.
His paintings were much studied by art students of the period, and were part of a wider discourse that was taking place at the time, led by intellectual luminaries such as James Wood.