Lt Richard Barrett Talbot Kelly: An RE8 with a French Nieuport 27 fighter escort, circa 1916 - on Art WW I 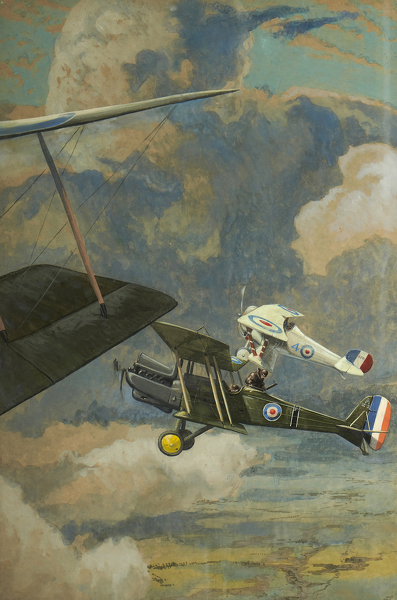 This composition shows a British RE8, (a two-seat biplane reconnaissance aircraft), with a black band on the fuselage, escorted by a cream coloured Nieuport 27. (a French fighter aircraft).

Similar compositions by Kelly are in the collection of the RAF Museum, Hendon, though this - the largest recorded work of its kind - is unique in its format.

T.K. (as he was known) was commissioned in April 1915 and joined the 52nd Brigade, Royal Field Artillery, in May. The Brigade served  in France as part of the Divisional Artillery of 9th (Scottish) Division - this was the first Territorial Division to go to France, during which time the 9th Division spent long periods in the trenches and Kelly found himself at the battles of Festubert, Loos, 2nd Ypres and the Somme in 1916. As a gunner subaltern, his job generally would take him to live up front with the infantry where he would observe the fire of his batteries on the German positions.  He was blown up on the 5th August during a bombardment and invalided home. After his recovery, he returned to France in March 1918 to study concealment techniques and then came back to England to become Specialist Instructor in Camouflage at the School of Artillery at Larkhill. His interest in flying was such that he applied to be trained as a pilot. He was posted to the Royal Flying School at Reading but the war ended just as he was about to join his training squadron..

A book entitled 'A Subaltern's Odyssey, A Memoir of the Great War 1915-1917' was published in 1980 based on Richard Talbot Kelly's diaries

We are grateful to Andrew Cormack and David and Judith Cohen for assistance.