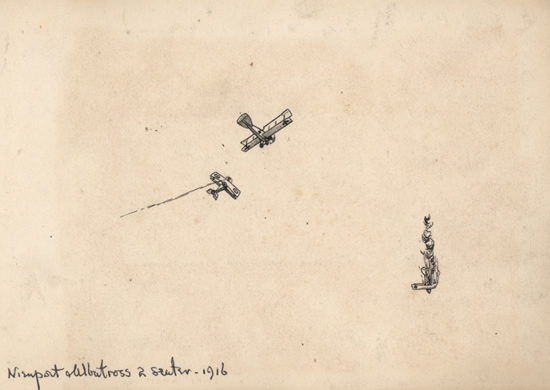 
This shows an on-the-spot drawing of  an aerial battle between a French Nieuport fighter plane and a German 2-seater Albatros observation plane, c. 1916.  The Albatros C.III was a German two-seater general-purpose biplane of World War I, built by Albatros Flugzeugwerke. Talbot Kelly’s account of the First World War is recorded in A Subaltern’s
Odyssey (1980).
The term “dogfight” originated during WWI. The pilot had to turn off the plane’s engine from time to time so it would not stall when the plane turned quickly in the air. When a pilot restarted his engine midair, it sounded like dogs barking
.